If you haven’t seen Cinderella Man starring Russell Crowe, put it on your list immediately.

When I talk about staying mentally strong, this is one movie I love to reference.

There is a fine line between being a positive person and preparing for adversity. James Braddock finds himself down on his luck after being a successful boxer and needs to fight through the hard times for his family.

This doesn’t require just physical endurance (he’s a boxer and also does physical labor on the docks), but mental endurance as well. To wake up every day, put on his outfit, and keep fighting for every single scrap he can get. 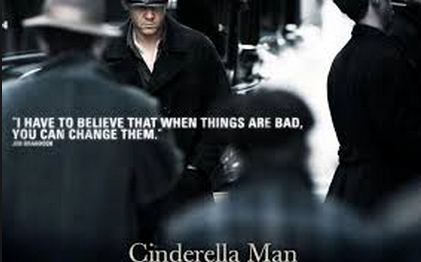 This requires a different kind of endurance than just being able to put weights up and down.

On your journey to a better body, do not overlook developing your mental strength as well. There are a ton of people out there with rock-hard abs and zero ability to actually handle stress.

There will always be unforeseen circumstances that come your way, things that happen that you have no control over. Assuming that you’ll just “deal with it” when it comes is nonsense. You have to mentally prepare yourself for things around the corner that you don’t see coming.

Muscles grow with resistance, and the mind is no different.

There are tons of people who can’t handle an ounce of resistance. They crumble to the smallest amounts of adversity.

There will always be times in life where we must find that tough warrior within and battle our way through life. Something will happen to our families, our loved ones, or our own lives, and we must fight to pull ourselves out of the situation.

Instead of building the fundamental habits for a better life, people waste their time playing video games, smoking weed (I live in Denver, so this is incredibly common), scrolling through Facebook, drinking their savings away at bars, watching football,  watching reality TV… It’s all a waste of time, especially if you aren’t where you want to be in life.

If you aren’t making as much money as you want, don’t have your dream body, aren’t learning anything new, or progressing toward any goal you want, why would you waste a second flushing your time down the toilet instead of taking the action steps needed to move your life forward?

This is something I constantly battle, and so do most of the people I know. Time vampires are everywhere, waiting to suck the life out of you.

Of course, breaks are good, but at the sacrifice of your goals, any breaks should be destroyed.

This site uses Akismet to reduce spam. Learn how your comment data is processed.